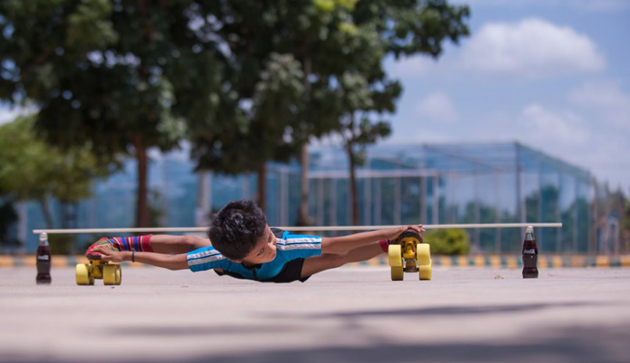 A Hyper-flexible six-year-old schoolboy Gagan Satish has become a legend of limbo Roller skating by skating under 39 cars in a row in just 29 seconds to cover about 70 metres of distances with his face only five inches off the ground. He says, “Skating has been my childhood passion which I have been pursuing since I was three years old. My next aim is to skate under 100 cars and to go to the Olympics.” This little champion from Bangalore has become an inspiration in his hometown and motivated kids to take up the skating as a sport.

Gagan’s incredible accomplishment is yet to be acknowledged by the Guinness Book of World Records and has been recognized by the India Book of Records with the entitlement the “Farthest Distance In Limbo Skating Under Cars.”

In an interview with the Daily Mail his father says, “He gets up early in the morning at 5 am for coaching classes and practices skating there for hours. He goes to school after that and again he goes out for skating in the evenings after coming back from school.”

This tiny little boy’s breathtaking stunts might leave your jaw wide open in shock and disbelief. He certainly is incredible..