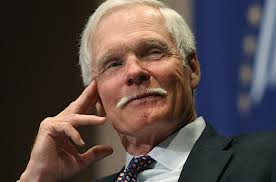 American media magnate Robert Edward Ted Turner is widely known as the founder of the world’s first around-the-clock cable news channel CNN and one of the most generous philanthropists who donated 1 billion dollar to support the humanitarian causes of United Nations.

Ted Turner was born on November 19, 1938 in Cincinnati, Ohio to a billboard magnate Robert Edward Turner II and Florence. When he was 9 years old, his family moved to Tennessee where he attended a private boys’ preparatory school The McCallie School in Chattanooga, Tennessee. At the very early age, Ted started working at his father’s advertising business during which he mastered at every aspect of business ranging from maintenance to finance. Later, he pursued Economics in Brown University where he was famous as “The Terrible Ted” for his wired and eccentric behavior. Before completion of his degree he got expelled from the university for breaking the dormitory rules. He returned to Georgia and joined his father’s billboard business but soon he had to face the painful phase of life due to the death of his sister from prolonged painful illness, divorce of his parents and falling health of father. In March of 1963, he was shocked by another biggest tragedy when his father shot himself to death leaving the charge of a rising but heavily indebted business empire on his shoulder. He threw himself into extreme work and took over the roles of president and chief executive officer at Turner Advertising at the age of 24 and dedicated himself to the business, often working 15 hours a day and seven days a week. In the course of next 10 years, he developed his various competitive talents to stand the Turner Advertising as the largest billboard company in the Southeast. The next, he ventured into broadcasting when he experienced that Cable television was still in its infancy.

He expanded his business into television purchasing the rights to telecast old movies and renamed his company’s to Turner Broadcasting Company. In late 1970s he initiated the history of the Cable News Network by envisioning the idea for an all-news network and in 1980 Cable News Network (CNN) was first aired.
Soon his channel gained immense popularity and built prominence by providing 24-hour consistent television news coverage. CNN reporters provided relentless coverage on daily events they left a mark by reporting on events like Challenger disaster in 1986 and the first Persian Gulf War in 1991.

In 1992, Turner created the Cartoon Network and launched Turner Network Television and Turner Classic Movies. Later he sold the company for $7.5 billion dollars to Time Warner but stayed with the company and looked after the company’s cable networks that include Home Box Office (HBO). In 2001, he ventured into a new business endeavor Ted’s Montana Grill, a steakhouse serving bison. He is the largest landowner in the United States with about 2 million acres land and the largest herd of bisons.

I’ve had the good fortune to have a much more diverse life than most people would, professional sports and television and news and movies.

You should set goals beyond your reach so you always have something to live for.