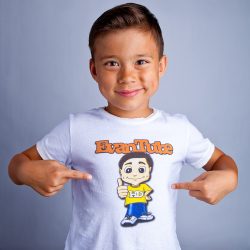 What this 8-year-old boy Evan has accomplished is impressive! He is a fun game commentator of a family-friendly YouTube channel EvanTubeHD, where Evan reviews his favorite toys and video games. Evan has another channel that goes by the name EvanTubeRAW where he along with his parents and younger sister talk about ongoing projects and show behind-the-scene footage.
According to reports Evan makes over $1.3 million a year from his channel EvanTubeHD, which has grabbed astounding 751 million channel views in just a few years. His other channel EvanTubeRAW has already crossed 145 million views.
His dad records his reviews, edits them with a couple of special effects, and uploads the final video. His sister and mother assist him sometimes to make things interesting.

Evan’s dad Jared states that all started with Evan who initiated him to start making Angry Birds stop-motion clay model videos and post them on YouTube so that he could share them with his friends. “We started making about a video every month as a fun little project… it was interesting but when our original clay model video actually hit 1 million views, we realized how massive our fun project has become” Evan’s father said.