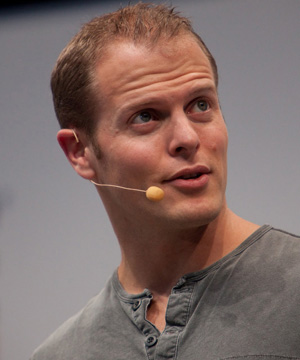 Serial entrepreneur, educational activist and The New York Times bestselling author Timothy Ferriss appears as a guest speaker at some of the world’s most reputed and innovative organizations including Harvard Business School, PayPal, Google, MIT, Facebook, Microsoft, Ask.com and the Stanford Graduate School of Business. In addition, Ferriss has been profiled in more than 100 media outlets including National Geographic Traveler, TIME, The Economist, Fortune, Forbes, CNN, Maxim, and others.

His self-help book The 4-Hour Workweek was published in 2007 by Random House and it entered in The Wall Street Journal and the New York Times bestsellers’ list with about 1,350,000 copies sold. The 4-Hour Workweek is widely acclaimed as the a work-life philosophy book in which Ferriss has highlighted the step-by-step process (Definition, Elimination, Automation, and Liberation) to escape from the rat race of life and design a healthy and wealthy lifestyle. The book warns against the information overdose and advocates outsourcing works to the developing countries such as India and Philippines.
His next bestselling book The 4-Hour Body was published on December 14, 2010. The book is based on his 15 years of personal venture and quest into getting healthy and fit. The book contains the wisdom of renowned MDs, athletes, his own personal experience and scientific research for expanding the life expectancy. His third book The 4-Hour Chef, which is about to release by Amazon in 2012, is more about leaning any skill such as cooking and living a happy life.

Besides a writer, he is a national champion in Chinese kickboxing, a world-record holder in tango, an occasional actor and runs a multinational firm. Since 2003, he has been a guest lecturer at Princeton University where he lectures on how to impact and change the world and live a healthy and meaningful life through entrepreneurship.

“A person’s success in life can usually be measured by the number of uncomfortable conversations he or she is willing to have.”

“Money is multiplied in practical value depending on the number of W’s you control in your life: what you do, when you do it, where you do it, and with whom you do it. I call this the freedom multiplier. Options—the ability to choose—is real power.”

“For all their bitching about what’s holding them back, most people have a lot of trouble coming up with the defined dreams they’re being held from.”

“Dreamlining is so named because it applies timelines to what most would consider dreams.”

“If you are insecure, guess what? The rest of the world is, too. Do not overestimate the competition and underestimate yourself. You are better than you think.”