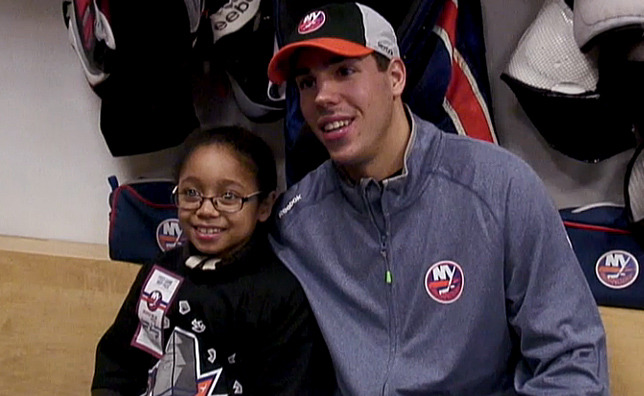 Canadian professional ice hockey Travis Hamonic is one of the best defensemen in hockey today. He represents the New York Islanders in the NHL. In every match he plays, large crowds sit in the gallery to watch him play with his team. But there’s always one person sitting in the crowd, waiting to meet Hamonic at the end of the match for the first time – a child without a parent, reaching out to the otherwise quiet Hamonic so they both find some closure.

Hamonic was an introverted child, and grew up believing that it’s best to keep his feelings to himself. But he changed his ways, for a greater cause and for the memories of his father.

As a child, Travis Hamonic grew up in Manitoba, in a small farming community of St. Malo in the Canadian plains, with his three elder siblings, father Jerry and mother Lisa. He was a part of a picture-perfect farm family. Jerry, a farmer, was a hardworking man who left for the farm early in the morning, and came back for lunch with his family. Despite his busy schedule and tiring work, he always had time for his family. Travis and his siblings were lucky to have a caring father who spent a lot of time with them.

For Travis, his father was his superhero, with whom he felt the safest. Travis started showing interest in sports early, and soon, he had developed a deep bonding with his father. Little kids, in their earlier years, tend to be more connected to their mothers, while their association with their fathers develops later. Travis, however, formed a connection with his father very early. As the tie only grew stronger and stronger with time, it even started getting reflected on the ice.

Travis used to go to the ice skating rink with his father. He was about five years old when his parents realized that he had an aptitude for ice hockey. When his parents saw him playing with some older kids and being cheered, they realized that he probably had a future in this sport. The father-son attachment evidently evolved from their love for the great game. But Travis always felt that his father was proud of him, whether he was on the ice or on the field, and believes that he would be proud of his son no matter what Travis would do in life.

But the perfect little idyll that the Hamonic family was living was turned upside down in September 2000. Jerry came home with the harvest; they all ate together, and Jerry put his children to bed. For 10 year old Jerry, the day ended on a mundanely happy note as he fell asleep. Little did he know that it would be the last time for him to be tucked in by his father.

Travis got woken up by his screaming sister who was trying to explain what had happened. Jerry had had a massive heart attack, and as he was being taken to the hospital, he stretched out his hand, unable to talk, little Travis just grabbed it. That is the last memory he has of his father, because 44 year old Jerry died that night. But, with the memory of this moment, there was something else that got instilled in his mind: he still remembers the shock he went through, trying to comprehend everything. It is not incomprehensible that for a ten year old child, dealing with the loss of a father is difficult.

As a few days went by, Travis and his mother went to his dad’s farm, to face the reality that they had been left to deal with. They were devastated and terrified. But with Jerry gone, Travis and his elder brother took the responsibility to bring in the harvest for one last time. Travis drove the tractor like his father had taught him to.

But life could not stop. So, the following year, Lisa sold the farm, and in 2003, she and Travis moved to Winnipeg, where she took the job of a nurse, while Travis concentrated on his game. Soon, the young boy emerged as one of the most promising players of the region. He found solace in the sport. Travis never talked much about his dad’s death, and kept his feelings bottled up. It was only through ice hockey that he could deal with his pain. It was his escape. He found it easier to shut everyone out, instead of talking about his loss. Or, was it perhaps his way of feeling closer to his lost father who had once led him to the world of sports? Travis knows deep inside that his father is with him, every day.

At 17, Travis got selected in the second round of the NHL draft by the New York Islanders, and finally got his call in November 2010 to make his NHL debut, after 19 games in the American Hockey League with the Islanders’ top minor league affiliate, the Bridgeport Sound Tigers. The first thing that struck the member of his family when they heard of the big moment was that his dad would be so proud if he had been there to see it.

Travis made quite a strong impact in the game, almost immediately. He makes his presence felt in every match he plays. The last thing he does before every game is to look at the left corner of the rink, as he imagines what it would be like to have his father sitting there, cheering for him and watching him tear his opponents down. He has only one question. Is his dad watching him?

Travis is ready to trade in every NHL game he has ever played, or will play, just for one shift with his father being able to watch him play, and for himself to be able to talk about it after the game. Today, Travis wishes that at some point in his life, he had received some guidance regarding how to deal with the loss of someone he loved so much, someone who was so important to him. He had always thought that being silent about his feelings was the best way to get past his grief and move on. But on re-evaluation, he realized that trying not to think about his pain was not the right method of dealing with his feelings. In fact, the repressed pain was only gnawing at him on the inside.

So, finally, Travis made a proposal to his team to do something special, and they immediately put to action. At the end of every Islanders’ home game, Travis meets children who have lost a parent. He bares his heart and shares his story with people he doesn’t know, and they do the same. It helps him forge a bond with these young, pained souls – a bond he wishes he did not have to share. But, it helps to instill the faith that they can help each other. He gives them a tour of the auditorium, gives them signed memorabilia, and then talks to them, heart to heart. He does not believe in lecturing about life and death. He just wants them to realize that whatever they go through in the moments of crisis is normal, and that the pain will pass, soon. The surviving parents appreciate this initiative greatly.

Those who meet Travis say that it is the best thing to happen to them. While some say that meeting him is like meeting a brother who shares his experience and reassuring words. Others say that meeting him has opened up a new path at the time when the world seemed to be coming to an end.  When these young people, unable to open up or ask for help from their near ones, reach out to Travis, he see people who are lost and do not know what to do next. He sees himself in them. He does not hesitate to give them his personal email address, in case they need a friend. He wants them to understand that the world will carry on, and it will get better.

Travis has finally found a way to give voice to the pain and grief which he had locked away for many years. As he helps others, he feels himself healing, at last, bit by bit. He thinks that it’s these people coming to him who are actually helping him, instead of the other way around.

There comes a time in every child’s life when s/he has to deal with the death of parents. For some, this moment comes later in live, while for many, this moment of truth comes before they can process it. A few unlucky ones do not even get the opportunity to know the man who could be their friend, philosopher and guide. Trying to block the pain, the emptiness, the anger, the depression is can be unhealthy, leading to severe depression, and much more. There are others going through the same struggle, spending father’s day with the knowledge that the day will never be the same for them as the others. Feeling one with other troubled souls helps a person to feel less lonely in his battle. S/he finds reassurance in being understood, and a hope that things will turn around. To find someone to talk to helps realize that the love and blessings of a parent are always going to be there as a protective shield. Travis Hamonic, in his own little way, is providing that safe space – for others, and for himself.

You may also watch this beautiful short by E:60.