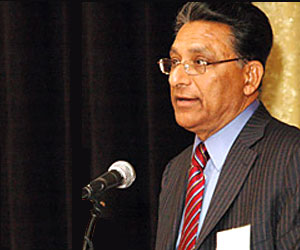 An inventor, entrepreneur and venture capitalist Vinod Dham is widely known as ‘the Father of the Pentium chip’ for his significant contribution in developing the most successful Pentium Processors for Intel. After working for extended 16 years, he left the company to start his journey as a venture capitalist, investor, mentor and advisor in silicon valley.

Vinod Dham was born in 1950 in Pune, India. He completed his graduation in Electrical Engineering from Delhi College of Engineering in 1971 at the age of 21. On completion, he worked for a Delhi-based semiconductor company Continental Devices until 1975 after which he moved to the U.S. and completed his Masters in Electrical Engineering from the University of Cincinnati in 1977. He joined the National Cash Register at Dayton, Ohio as a team member of the NCR’s memory design group where he received several patents for his work. Later, he was hired by Intel Company during his presentation at the IEEE conference in Monterrey, California on re-programmable memory. In 1990, he led the team that developed the 586 or Pentium processor, which became an instant hit in the market. Soon, Vinod was promoted to the position of the Vice President of the Intel’s Microprocessor Products Group.

In 1995, he left Intel and joined a startup NexGen, which was acquired by AMD in 1996, as Chief Operating Officer and Executive Vice President and played crucial role in developing AMD’s famous and world’s fastest K6 Processor. Later he also quit AMD and led a nascent startup and a communications technology development firm Silicon Spice where he became the chairman, president and chief executive officer.

In 1993, Vinod Dham was quoted one of the top 25 executives in the US computer industry and in 1999 he was among the top 100 most influential Asian Americans of the decade. In 2007, he was featured at the Pravasi Bhartiya Diwas organised by the Ministry of Overseas Affairs of the government of India, and profiled among 50 Most Influential Indian Americans by India Abroad (weekly newspaper published from New York City). In 2011, he was awarded the People Choice Award and Special Jury Award in the category of Science and technology by Times of India Group’s ‘Light of India Awards’ for his noteworthy contribution abroad.