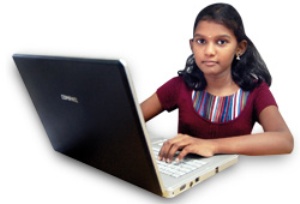 Born in Thirunelveli, a small city of Tamil Nadu, to an electrician father, Vishalini is no different than other children of her age who love watching cartons, riding bicycle and playing games; however, her IQ and intelligence is not of an average 11-year-old girl. She is a child prodigy blessed with exceptional computer and analytical skills. According to reports, her IQ stands at 225, which is considerably higher than the previous Guinness of world record holder, Kim Ung-Yong, whose IQ is approximately 210. Her wonderful accomplishments include the Microsoft Certified Professional and Cisco Certified Network Associate (CCNA). By scoring 90 % in CCNA, Vishalini has broken the record of a Pakistani girl Arfa Karim Randhawa (At the age 9,she was the youngest MCP). Unfortunately, Arfa succumbed to a cardiac arrest on 14th of January last month; she was only 16.

Recently, she participated at an international seminar which was held at the National Institute of Technology Karnataka (NITK), Mangalore, where she was invited as a guest speaker. It wasn’t the first time Vishalini addressed a strong tech gathering; several such offers and honors have become a part of her daily routine. She lectures engineering students about the Technical fundamentals and computer intricacies.

According to her family, she had speech impairment in the early childhood that caused a great concern of her family, her mother Mrs. Sethurakamalika says that “despite her blessed intelligence, Vishalini struggled to talk at her younger age and as per the consultancy given by a doctor, we interacted regularly with her and we could see some positive results in six months.”

Today, Vishalini deserves more exposure and support which should come from beyond the government of Tamil Nadu and a couple of engineering colleges; her talent must be recognized and appreciated by the central government as well as every citizen of India. She is not only a bright star of her family but also a gem for the whole country. “Hats off to Vishalinin!”