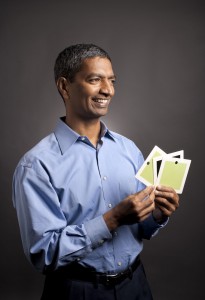 Dr. K. R. Sridhar is a man of many talents: a true Indian scholar, nuclear physicist, professor of aerospace and mechanical engineering, innovator, entrepreneur and, a passionate futurist who envisions a self-reliant world. Currently, serving as the principal co-founder and CEO of Bloom Energy, his innovation, the Bloom Box, has been widely regarded as the the “Holy Grail” of clean energy.

Born in India, in 1960, Sridhar completed his B Tech in Mechanical Engineering from National Institute of Technology, Tiruchirappalli under the University of Madras. On completion, he moved to the United States to complete an M.S. and Ph.D. in Nuclear Engineering at the University of Illinois.
After graduating from the university, in 1990, he started his career at the the University of Arizona sponsored Space Technologies Laboratory (STL) and was soon promoted to the post of the director.

In 1994, Dr. Sridhar joined NASA to develop a device that could convert water into oxygen for their futuristic Mars mission. Over the next seven years, he led the team of scientists and engineers that successfully developed a device that used solar power and water extracted from the planets and subsequently powered a reactor cell that produced oxygen to breathe and hydrogen to power machines and vehicles. Unfortunately, he could never see his device being used on NASA’s Mars Surveyor 2001 Lander mission. The mission was cancelled for some technical reasons.

Instead of getting disheartened, Dr. Sridhar got a unique idea – he decided to reverse the process and use oxygen and hydrogen to create power, the electricity. In 2001, he founded a company called Ion America to develop fuel-cell technology that could generate eco-friendly electricity at highly inexpensive prices. In less than 3 years, Sridhar managed to raise $400 million through venture capital. In 2002, he shifted the company center to the NASA Ames Research Center; and in 2006, he renamed the company to Bloom Energy and called his fuel cells the ‘Bloom Box’.

According to Dr. Sridhar, a Bloom Box comprises of some fuel cells or skinny square-like batteries that use oxygen and fuel to generate electricity with zero emissions. The fuel cells are primarily made of sea sand that is baked and molded into ceramic squares and then painted with black and green ink on the both sides. Each fuel cell is so powerful that it can light a 40 watt bulb. The fuel cells are then stacked in a metal box sandwiched with metal alloy plates. Finally the power boxes are housed in a refrigerator-like large boxes that are called the Bloom Box. Finally, to generate electricity, the box is supplied with the oxygen is supplied from one side and and fuel ( it could be anything the fossil-fuel, bio-fuel, or solar power) is fed from the other side. When they combine, they create a chemical reaction and thus electricity is generated without any pollution or noise.

Watch the following interview in which Dr. Sridhar sheds light on his technology and his dream of lighting the whole world with clean and environmentally friendly energy.