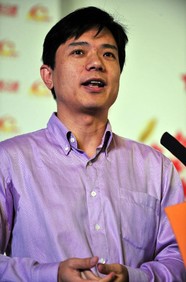 Baidu Co-founder and Internet entrepreneur Robin Li is the richest man in China whose personal net worth, according to Forbes, stands at about $10.2 billion.
In 2000, he teamed up with Eric Xu and together they founded the most popular search engine in China, Baidu.Com. In 2004, he became CEO of Baidu and in 2005 the company was enlisted on NASDAQ. As of now, the search engine ranks #5 on Alexa and receives about 220 million pageviews per day.

Early Life, the Hardships and Education

Robin Li was born in Yangquan of Shanxi Province in northern China to factory worker parents. Back then, Yangquan was an underdeveloped prefectural city that did not offer much to its people and most of them would migrate to other parts of China for better prospects. Like most of the kids in the neighborhood, Li spent his childhood in acute hardships and lack of better education. His mother, however, taught him to stay motivated for a better tomorrow. He grew up remembering his mother’s words, “We don’t have a back door, if you want a better life, a better job in the future you will have to study hard and ensure you get into the best college.”

Li never forgot his mother’s words and studied religiously. He cleared the entrance of Peking University and completed Bachelor of Science degree in library information management. On completion of studies in 1991, he took up a temporary job and worked for one and a half years. Li moved to the U.S. on a Fellowship program and attended The State University of New York at Buffalo and earned a doctoral degree in computer science. In 1994, he received his Master of Science degree but didn’t continue with the PhD. The same year in 1994, he served at New Jersey division of Dow Jones and Company, IDD Information Services, as a software developer for the online edition of The Wall Street Journal. In 1996, Li received a U.S. patent for his development of the ‘Rankdex’ which is a site-scoring algorithm for search engine page ranking. In 1997 he left the company to start working on his own search engine.

In 2001, he was honored with the title “the Chinese Top Ten Innovative Pioneers”, in 2007 he was in CNN Money’s annual list of “50 people who matter now”, in 2011, he was enlisted as one of the 15 Asian Scientists To Watch by Asian Scientist Magazine and was ranked 95th in the Forbes Global List with an possessions worth of $9.4 billion. He was also chosen as the “Most Influential Business Leader in China” as well as “Best Business Leader” by Fortune and American Business Weekly and several for his accomplishments.