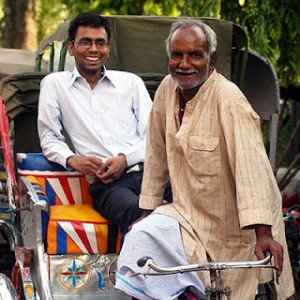 Govind Jaiswal with his father

“I am very sure that all the youngsters who are living in deprivation and facing consistent difficulties can accomplish anything and everything provided they have the will and courage.” – Govind Jaiswal

Once an 11-year-old boy, the son of an illiterate rickshaw puller, went to play at his considerably rich and respected friend’s house. Minutes later, he was insulted, disgraced and literally thrown out. The educated man yelled at him, “How dare you come here and mix with my son; don’t you know who you are and where you belong?” Vindictive taunts and phrases like ‘However much you study, you will still be a rickshaw-puller’ son, ‘What is your worth? You can only take your father’s business a bit further’, ‘Your father’s one rickshaw can become two or three tomorrow with your initiation’ were very common in his life to stumble upon on a daily basis.

But these ‘TAUNTS and INSULTS’ steeled Govind Jaiswal’s determination and initiated a dream journey for him to become an IAS officer.

A question ‘What to do so that people respect me?’ knocked his deep and the answer, he received from somebody, ‘Either you request your father to change his profession or you become big’ shook him from inside. It was impossible for him to change the profession of his father so he chose the second. An 11 year old Govind did not know what it took to become an IAS officer but he knew he will do his every bit to see himself where he wanted to. Govind started spending most of his time studying with cotton jammed in his ears to stop the extreme clatter of printing machines and generators of his neighbourhood. His father somehow managed a math tuition for him by investing all his hard work, energy and courage to make his son’s dream come true. He studied in government school and college and took advantage of students’ library. Later, on completion of graduation, he was sent to Delhi with Rs. 40,000 that his father managed by selling his only remaining piece of land. Govind ensured his father’s investment don’t go in vain and studied 18 hours a day. He often skipped one or two meals a day to save money and practiced rigorously.

In 2006, one of the most emotional and proudest moments came in his life when 23 year old Govind ranked #48 among 474 successful candidates in the Civil Services Exam. Unlike most of the toppers, it was his very first attempt.

In an interview to a TV channel, his sister Nirmala said,
“My father had hardest time sending me money; he was exhausted and could not go beyond this year. It was becoming tough pulling rickshaw with his wounded legs. Govind was also earning Rs. 1,500 from tuitions, which is still less for living in a city like Delhi. I don’t know what would have happened if he’d not have made it this year……from 10 days before the results were to be announced, my father could not sleep a wink”

“Anyone who can understand my hardships and circumstances will realize that I had no other option. Neither I could go for a lower government jobs as they are mostly fixed nor I could start a business as I had no money for it. I went for the option I was left with: worked hard on studies” Govind said after successful medical procedures, which is mandatory for IAS. His success dramatically changed his life forever.
Today, Govind Jaiswal is a respected IAS officer whose success story inspires and motivates thousands of youths across India.

While our country India has been suffering from the lack of accountability and corruption, Govind’s thoughts are flamed by the honesty and idealism of youth. He is thankful to his hardships and struggles and is determined not to drown his character or honesty or be influenced by anything in future. It is apparent when he says, “Today I am thankful to my circumstances and hardships through which I have evolved and curved progress. Now that I am an officer my character has been be put to the test and that is a proof for me to see what a real man I am.”

Don’t break down if someone tries to show where you belong to. Give them a meaningful answer not by your words but by your actions and courage. These people are ignorant about you worth and potential.

Willpower is the key ingredient of any accomplishment. Be so determined that nobody could stop you from moving ahead! There are and will be a bunch of negative people on your way of destination, ready to discourage you by saying ‘No’ and this is the time when you perseverance be put on test — break or achieve what you dream of; prove or only imagine.

Never take you idleness for granted under the pretext of hardships that bring life lessons and help you to find out the right way to accomplish anything you want. Remember, every great personality emerged through their hardships.

Don’t take shelter in some lame excuses as it keeps you from overcoming challenges and making a thing possible. There is a very good saying, “Ninety-nine percent of the failures come from people who have the habit of making excuses.” – George Washington Carver

Don’t waste your energy on worthless and insignificant events. There were many times when Govind Jaiswal felt like hitting negative people who were consistently taunting him but he never did lost his cool; instead, he used his all his energy in pursuing his dreams.

Recommended for you: Dashrath Manjhi, the Man who Moved a Mountain