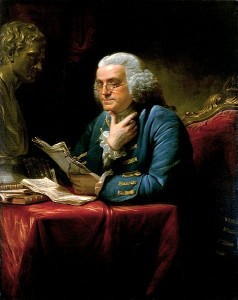 How do we remember Benjamin Franklin?

The answer is as an author, scientist, inventor, political theorist, politician, postmaster, musician, civic activist, satirist, diplomat, and above all among the Founding Fathers of the United States.
But how many of us know that he was a completely self-made man whose sheer hard work, curiosity and extreme interest and quest for knowledge played prime role in his every single accomplishment. Born into the family of a Boston candle maker, Franklin had only two years of formal education, but he proved that academic education is not the sole criteria for success in life. Even the most difficult things can be achieved provided you work hard and stay tremendously curious about anything that comes your way in life.

The list of his accomplishments is countless. He was a pioneering figure in the American Enlightenment as well as in the history of physics for his investigations, theories and discoveries into the nature of electricity. His inventions include bifocals, the lightning rod, a carriageodometer, the Franklin stove, and the glass ‘armonica’. As a thinker he was the man behind the first subscription library, the Junto discussion group, and the American Philosophical Society. He served his city, state and country as a postmaster, councilman, and recruiter of the Pennsylvania militia. He was the ambassador to France, President of Pennsylvania, the Speaker of the Pennsylvania State House, and delegate to the Second Continental Congress.

1. Franklin was never favored by luck or chance, every bit of his success came by his own extreme had work.
Hard work is the only answer to every accomplishment; there is no short-cut or alternatives to achieving greatest things. Despite having a very difficult early life, he rose through hard work and became one of the greatest immortal personalities whose influence will be felt till the existence of humanity.

2. It does not matter how much adverse circumstances or difficulties we have to deal with to accomplish our goals. At the end of the day, what counts is the satisfaction of completing the journey and the experiences that come along in the process.

3. We learn less when success arrives by chance or luck. How? Because we miss the precious experiences that we gather from difficulties. Moreover, we value it less besides missing the pride for accomplishing things through hard work. “The harder you work the more you evolve as a person!”

4. Problems and difficulties are natural forces that take us a step near to success. Some of us use these natural forces as opportunity to find the solution while others avoid them as obstacle.

5. It does not matter where you belong to. To become big, what matters is what you want to be and what you expect from life. Benjamin Franklin was the son of candle-maker and soap-maker but that didn’t have any slightest impact on what he became.

6. Don’t be afraid of embracing the humble beginning that gives you the hint of rising above what you aspire to be. All great success stories start from humble beginnings.

“You may delay, but time will not.”

“Love your enemies; for they shall tell you all your faults.”

“Never leave that till tomorrow which you can do today.”

“A learned blockhead is a greater blockhead than an ignorant one.”

“Be at war with your vices, at peace with your neighbors, and let every new year find you a better man.”

“Being ignorant is not so much a shame, as being unwilling to learn.”

“By failing to prepare, you are preparing to fail.”

“If a man could have half of his wishes, he would double his troubles.”

“If you would not be forgotten as soon as you are dead, either write something worth reading or do things worth writing.”

“There are two ways of being happy: We must either diminish our wants or augment our means – either may do – the result is the same and it is for each man to decide for himself and to do that which happens to be easier.”