“Living involves tearing up one rough draft after another.” ~Author Unknown 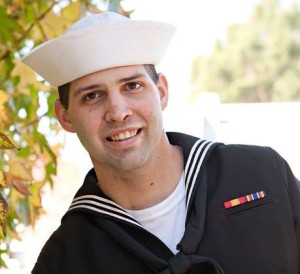 A Navy veteran and cancer patient Bryan Fazio is a remarkable man of tremendous courage – the man who has been battling the audacious form of cancer by embracing the curve balls it has thrown to him and taking advantage of it to make the rest of his life more meaningful, significant and purposeful.

In 2009, on completion of his bachelor’s degree in political science from Concordia University Irvine, Fazio joined the Navy with immense enthusiasm and expectation to start a glorious career spanning decades. During the training, he went for a general checkup after having trouble in breathing which he mistakenly thought of pneumonia. On close observations doctors found a 15-centimeter tumor in his chest. He found himself to be in the sudden midst of complete emptiness after being diagnosed of Stage 2 Hodgkin’s lymphoma, an aggressive form of cancer that affects the immune system, and given only a 15% chance to be alive. Moreover, when his radiation, six rounds of chemotherapy, and two bone-marrow transplants failed to stop spreading the disease, he ran out of the option of giving up his dream of having a lifelong Navy Career, which was the harsh reality to accept for him. He might have have to let his dream go away but only to live another dream; instead of being a poor and helpless victim of cancer he chose to cling to the optimism and hope and channelized his energy and focus on earning an advanced degree (MBA). In August 2011, he enrolled for a Master of Business Administration (MBA) program at Brandman University to leave a powerful message to his parents and friends and most importantly to his cancer that tried to bow him down and beg for life. His failed treatment on aggressive cancer made him stronger and more determined to finish the course at the soonest.

“I really wanted to get my MBA because when you get an MBA you plan on living…I plan on making a difference in the business community, and I plan on being here to stay. I think that’s kind of my way of telling cancer and letting everyone know that I’m here to stay and I’m ready to fight however long the cancer wants to go on. I’m not giving up.” (Source: brandman.edu)

“I want to be a sense of hope for those people and for their families and show that you can continue to move forward, you can continue to be a leader and strive after your education, and you don’t need to be a victim to cancer. You can take cancer head on. You can embrace the adversity.” (hub.brandman.edu)

Despite the fact that he has lost his capacity to drive and has become completely dependent on his mother, he is the most consistent candidate of the class and in the past two years he hasn’t missed more than two or three classes. Bryan’s incredible courage, perseverance, dedication and spirit will certainly leave a significant message of living the life at the fullest regardless of how much you are jostling through the world or being jostled. His story will continue to inspire those who grieve over the transitory and inconsistent things and fret under the burden of the unassailable and immutable ones.