“Success Story of David Sarnoff, who emigrated to the United States at the age 9 and shouldered family responsibilities by selling newspapers; at the age 15, started working full time as an office boy; and went on to becoming one of the most influential men in America’s Radio and Television Industry.” 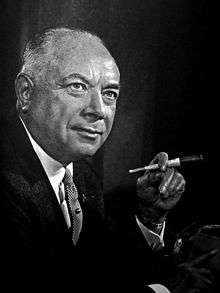 David Sarnoff, an American businessman, is widely remembered as the pioneering figure of American commercial radio and television.

He was born on February 27, 1891 in a semi-developed Jewish town in Uzlyany of Belarus to father Abraham and mother Leah Sarnoff. In 1990, he immigrated to the United States with his family- three sisters and one brother and mother. He supported his family by selling newspapers before as well as after school classes at the Educational Alliance. After a couple of years, in 1906, his father became debilitated by tuberculosis and he had to devote his full time to support his family – he was barely 15. Initially, Sarnoff looked for a full time career in selling newspapers and magazines, but it did not meet the expenses of his family so he joined the Marconi Wireless Telegraph Company of America. He started his career as an office boy and got promoted to the post of commercial manager in less than 13 years. In late 1920s, Sarnoff was appointed as the in-charge of radio broadcasting at Radio Corporation of America. In 1928, he pledged $100,000 to a Westinghouse engineer named, Vladimir Zworykin who was working on the idea of developing an all-electronic television system for the Westinghouse.
In 1929, Sarnoff led RCA purchased of the Victor Talking Machine Company, America’s largest manufacturer of records and phonographs. On January 3, 1930, Sarnoff became president of RCA. During 30s 40s and 50s; Sarnoff’s influence on radio and television industry was profoundly felt across the United States and European countries.

At the age of 79, in 1970, Sarnoff retired from all services and he died the following year. In 1989, he was posthumously inducted into the Radio Hall of Fame.

Lessons to learn from his life

1. Some of the most adverse life circumstances can come out to be the force to flourish and evolve. If we simply endure and face them gracefully, they take us towards what we are destined to become.

When David Sarnoff was young, his family wished him to be a rabbi but the plan was interrupted due to adverse circumstances. In 1900, his family emigrated to the United States where he had to help his family by selling newspapers. All of a sudden, when his father became the victim of tuberculosis, he had no other option except for becoming the main breadwinner of the family. He found a job in the Marconi Wireless Telegraph Company of America, where he educated himself about the every details of the communications business. Throughout his life, he ruled over an ever-mounting telecommunications as well as consumer electronics empire including RCA and NBC that became one of the largest companies in the world. He was thankful to his adverse situations that became positive triumph for him.

2. Great people – from greatest inventors to greatest businessmen- were always largely ignored and laughed at for their unique and unconventional ideas at the initial stage but they never felt discouraged because they had complete faith in what they were doing.

David Sarnoff was one of them. While working with Marconi Wireless Telegraph Company of America, he became interested in developing radio technology for which he kept his idea for a “radio music box” to his higher ups but unfortunately it fell to deaf ears. The company was bought by GE and became RCA. At the beginning of 1920′s his assumptions about the popularity of radio became true and he began to receive his deserving recognition and respect.

His story tells you to stick to your ideas. Don’t be discouraged if you are laughed at. They are laughing today out of their ignorance about what big you are to accomplish in future. The same people will give a high applause and will feel proud for your achievement. Do not lose faith in you only because you seem ridiculous to the fools. Fools can condemn and criticize you and they do their job well.

3. No job is small provided you aspire to learn from it and promise your-self to get a way to your destination from it. There are several examples in history that great people flourish from their small jobs through hard work, passion and desire. David Sarnoff is no exception, he would sell newspaper at his school days and the first full time job he picked up was that of an office boy.

David Sarnoffs Quotes To Live By:

“Nobody can be successful if he doesn’t love his work, love his job.”

“Success, in a generally accepted sense of the term, means the opportunity to experience and to realize to the maximum the forces that are within us.”

“The will to persevere is often the difference between failure and success.”

“What the human mind can conceive and believe it can accomplish.”

“Whatever course you have chosen for yourself, it will not be a chore but an adventure if you bring to it a sense of the glory of striving.”

“Work and live to serve others, to leave the world a little better than you found it and garner for yourself as much peace of mind as you can. This is happiness.”