16-year-old Dutch teenager Laura Dekker has become the youngest person to sail solo across the world. After circling the globe in her 11.5-metre two-masted ketch, that she started her journey on Jan. 20, 2011; Dekker finally arrived in the port of St. Maarten on Saturday, 21st January 2012. After braving hundreds of high seas and giant storms, she was warmly welcomed by huge crowd with great celebration in the port. 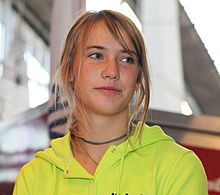 At the tender age of 6, she first sailed solo and she would dream about circling the globe from the age of only 10. She had already planned to sail when her sponsor lent her a 8.30 metres long and 2.75 metres width boat called, Guppy. In 2009, she declared her plan for a two-year solo sailing voyage across the globe in the Dutch national newspaper named Algemeen Dagblad. Until the time the Australian Jessica Watson was the youngest and she was younger than Watson when she completed her circumnavigation. Many Dutch officials and school authorities tried to discourage her trip stating that she was taking risk of her life but her father supported her plan.

Though The Guinness World Records has not yet recognized her records in order to discourage young sailors from taking risks of their lives by dangerous attempts; however, she said that she was satisfied for being the youngest sailor to complete the journey.