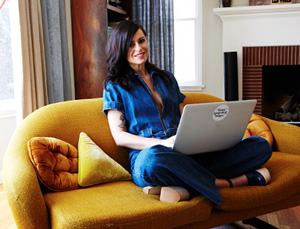 Net worth: $250 million
Position: CEO and Founder of Nasty Gal

The 28-year old American entrepreneur Sophia Amoruso has successfully turned her passion, a sophisticated sense for modern fashion, into a $250 million business. The company name ‘Nasty Gal’, according to Sophia, was taken from the song and album “Nasty Gal.” In 2006, at the age of 22, she started her journey by selling designer vintage pieces on eBay as a store Nasty Gal Vintage from her small apartment in San Francisco. Realizing the power of social media, she preferred to market her brand across Facebook, Twitter, Instagram and Tumblr which successfully worked for her. As of 2012, Nasty Gal has more than 66,000 Twitter followers, over 522,000 Facebook fans, and 405,000 Instagram followers.

Since its inception, Nasty Gal has maintained a consistent positive growth year by year and according to Inc. Magazine, it is the fasted growing retailer in the United States in 2012. It has more than 150,000 customers in over 50 countries across the world.

Her success didn’t come without struggle. Her family was going through hard time when she was only ten, her parents lost their jobs and she was taken off from the Catholic school to save family expenses. Her father started delivering newspaper early in the morning and she started selling lemonade in Sacramento. From the early childhood, she would love to read about start-ups and dream of starting something on her own and her father’s advice “Show up. Don’t stop moving. Sweep the floor even when they don’t ask you to” taught her to go for a humble beginning which she still maintains. She did several things to help her family but with the growing age she felt restless in deep within to accomplish something solid. By the age of 22, she did ten different retail jobs and continued until she founded vintage-clothing store on eBay. After one and half years on eBay, she was already making $115,000 in sales and had a strong base on MySpace where she had 30,000 friends. She thought of making the business big and moved her business in her step-aunt’s house to a studio in Benicia. Gradually she created a website called Nasty Gal. This is how her success story took off.