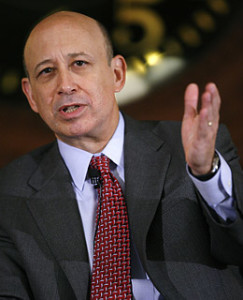 American businessman Lloyd Blankfein who is best known as the CEO and Chairman of the American multinational investment banking firm Goldman Sachs started his humble journey from being a concession vendor at Yankee Stadium.

He was born on September 20, 1954 in the Bronx borough of New York City to a Jewish family and brought up in the East New York section of Brooklyn, where his father worked with the U.S. Postal Service branch and his mother worked as a receptionist at a burglar alarm company. To end up working with Wall Street’s mightiest firm, he started his career as a concession vendor at Yankee Stadium at the early age.
“My struggle to get to and through college turned out to be an advantage for me,” Mr. Blankfein

Lloyd Blankfein completed his primary and secondary education in the public schools of the New York City Department of Education and attended Harvard College from where he earned his A.B. in 1975 and in 1978 he completed his J.D. degree from Harvard Law School. Upon completion of studies he worked as a corporate tax lawyer for the law firm Donovan, Leisure, Newton & Irvine for sometimes and in 1981, he joined J. Aron & Co, Goldman’s commodities trading arm, as a salesman of expensive metals. From here he started his journey of becoming one of the most successful CEOs and one of the highest paid executives on Wall Street.

In 2009 he was named as one of “The Most Outrageous CEOs of 2009” by Forbes magazine and “2009 Person of the Year” by Financial Times and in respect of his potential and significance stated that “His bank has stuck to its strengths, unashamedly taken advantage of the low interest rates and diminished competition resulting from the crisis to make big trading profits.”