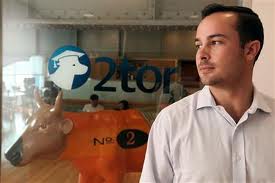 2tor, by implementing Web 2.0 technologies, develops futuristic technology platforms to transform conventional offline curricula and provides a comprehensive student support by offering significant logistical components of any online program, and assists universities with its best expertise, tools, capital, as well as worldwide recruiting. 2tor also makes partnership with universities to create, online degree programs. In a nutshell, 2tor has completely advanced and enhanced the way students interact with educational institutions for enrollment, job placements or sharing practical leaning experiences with each other across the country.

2tor Inc,. was founded in 2008 by technology entrepreneur Jeremy Johnson along with the founder of the Princeton Review, John Katzman. Since its inception, Jeremy has been playing multiple roles including working as Chief Technology Officer from 2008 to 2009 and Chief Marketing Officer since 2010. He has been featured on leading television channels such as ABC, CNBC, NBC, and FOX and has been invited for lectures at Princeton, Pace and Fordham.

2tor is Jeremy’s third venture, at the age of 15, he founded his first company, a marketplace for virtual currency, and at the age of 21, he established a social network around the college admissions process while still a student at Princeton University. Later, he left the university to devote his full time on his venture and after two years, it was acquired by Zinch.