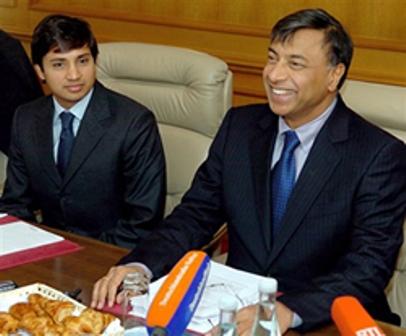 Lakshmi Niwas Mittal, the chairman and chief executive officer of ArcelorMittal, was born in 1950, June 15 at a village Sadulpur which is situated in the Churu district of Rajasthan. His father was a businessman in Rajasthan who’d deal in iron and steel. Mittal completed his Bachelor of commerce in Business and Accounting in 1969 from St. Xavier’s College in Calcutta. He started his career by contributing to his family’s steel making business in India. In 1976, he established LNM Group (now Mittal Steel). And in 1994, due to the difference with his family members, he separated himself and moved with the responsibility of taking care of international operations of the company. Mittal Steel expanded successfully across 14 countries in the world.

He is the member of the Advisory Board of the Kellogg School of Management in the U.S and working as Director of ICICI Bank Limited and a non-executive director of Goldman Sachs, EADS. Recently, he is the vice chairman of World Steel Association. In addition, he is also the member of the International Investment Council in South Africa, the International Iron and Steel Institute’s Executive Committee, the Foreign Investment Council in Kazakhstan and the World Economic Forum’s International Business Council
According to Forbes Magazine 2005, he was the third richest man with $25 billion, in 2009, he was the eighth richest man with $19.3 billion and in 2010, he soared to the fifth richest man across the world with $28.7 billion fortune.

Philanthropic work: in 2007, he raised £1 million on Apprentice, a celebrity special programme, for Comic Relief

In 1996 he received ‘Steelmaker of the Year’ from New Steel, in 1998, he received ‘Willy Korf Steel Vision Award’ and in 2004, Fortune magazine honored him with “European Businessman of the Year 2004” for his contribution in steel development and entrepreneurship skills.

Always think outside the box and embrace opportunities that appear, wherever they might be.
Lakshmi Mittal

Hard work certainly goes a long way. These days a lot of people work hard, so you have to make sure you work even harder and really dedicate yourself to what you are doing and setting out to achieve.

Everyone experiences tough times, it is a measure of your determination and dedication how you deal with them and how you can come through them.

In the past twenty years, we have lived through several cycles and we have always managed to buy under good terms and conditions at the right time. This has enabled us to build a solid group that is now the world number one.