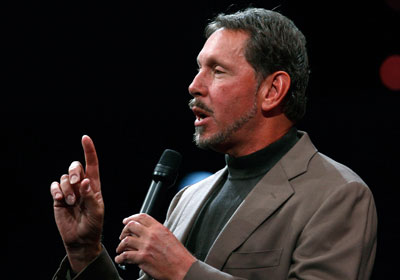 Lawrence Ellison,popularly known as Larry Ellison, co-founder and chief executive officer of Oracle Corporation, was born in 1944, on 17 August in New York City. He is the son of Florence Spellman, an unmarried Jewish lady. He grew up in Chicago with his mother’s uncle and aunt who adopted him when he was less than a year old. He never saw his biological mother until he was 48. From his early childhood, he was a bright student, and had lot of interest in science and math but he was inattentive. In 1958, he completed his graduation from Eugene Field Elementary School, Chicago. After that he attended Sullivan High School but the next year he moved to South Shore High School. He was known as a science student at the University of Illinois. He dropped his studies after the second year and enrolled at the University of Chicago where he learnt the commuter programming. But after first semester he dropped the idea of furthering his studies and he went to Northern California permanently at the age of 20. Next, for almost eight years he worked in various firms; he worked as a technician for Fireman’s Fund and Wells Fargo bank and later as a programmer at Amdahl Corporation

In 1970, he worked for Ampex Corporation where he developed a database for CIA named ‘Oracle’

In 1977, Lawrence with Robert Miner and Ed Oates, his fellow colleagues, established their own company Software Development Labs (now Oracle Corporation) where he played the role of Chief Executive officer. After two years, in 1979, Ellison changed the company name in Rational Software Inc.

After recovering from almost bankruptcy in 1990, once again Oracle started growing in America’s automobile company, airlines, banks and retail companies. Soon, it became a giant company. In 1992, with arrival of Oracle 7 into the market, it accomplished previous value and became leader in database management software

In 2004, Ellison took initiative to increase the market share and spent $25 billion in purchasing large and small sized companies, logistics and retail inventory, and software for managing database. In the same years, 2004, he bought PeopleSoft for $10 billion, then Siebel Systems and in 2007, software provider Hyperion Solution. In 2009, he declared to buy Sun Microsystems and in 2010, European Union agreed Oracle’s acquisition.

Besides being a successful businessman he takes interest in outdoor activities. In spite of undergoing a serious surgery, he practices acrobats and races his 78-foot yacht, Sayonara. In 2010, his sailing yacht USA 17 won the second race 33rd America’s Cup. He made history bringing 159 years America’s oldest trophy in international sport back.

According to Forbes Magazine 2012, he is the sixth richest man whose net worth is $41 billion.

Philanthropic work: In 2002, Ellison Medical Foundation predicted that Ellison will raise his annual contribution from $35 million to $100 million.

“I have had all of the disadvantages required for success.”

“When you innovate, you’ve got to be prepared for everyone telling you you’re nuts.”

“A corporation’s primary goal is to make money. Government’s primary role is to take a big chunk of that money and give it to others.”

“Our goal is very simply to become the desktop for e-businesses.”

“I saw that we needed to grow, but our top line wasn’t growing, so we had to find other ways to grow the business. We had to reshape our business and acquire share in a nonconventional way. But most tech leaders don’t come out of a business background. They really have a very parochial point of view. All they know are the go-go years of Silicon Valley. That’s the environment in which they were raised.”

“If your cash is about to run out you have to cut your cash flow. CEOs have to make those decisions and live with them however painful they might be. You have to act and act now, and act in the best interests of the company as a whole, even if that means that some people in the company who are your friends have to work somewhere else.”