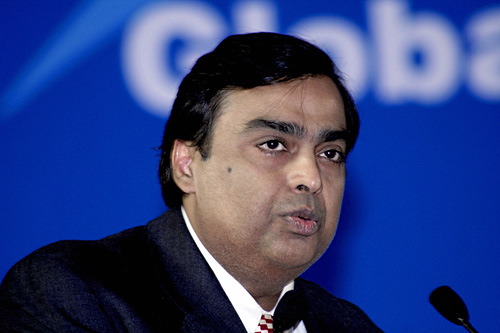 Mukesh Ambani, chairman and managing director of Reliance sector enterprise, was born in Aden, Yemen in 1957, April 19. He is the eldest son of Dhirubhai Ambani, the founder of the Reliance Industries, also regarded as India’s rags-to-riches business tycoon. He did his schooling from Abaay Morischa School, Gwalior and completed bachelor degree from UDCT, University Department of Chemical Technology. After, he got enrolled at Stanford University for MBA but left after 1 year of his studies and joined Reliance Industries in 1981 to further his father’s dream of expanding it across the world. He started his business venture from textile to petroleum refining, petrochemicals and gradually into oil and gas production. Within few years, he assisted creating over 60 new first-class manufacturing facilities with modern technology, finally setting up Reliance Infocomm Limited, which is known to be the world’s largest information and communication initiative.

According to Forbes Magazine he is the Asia’s riches person and 4th richest Billionaire across the world with $29 billion fortune.

In 2004, September, Voice and Data Magazine awarded him with the Telecom Man of the Year. In 2004, October, he received World Communication Award by Total Telecom for the Most Influential Person in Telecommunication 2004

Finance Times of November 2004 referred to a survey conducted by Pricewaterhouse Coopers, which stated Mukesh Ambani as the 42th World’s Most Respected Business Leaders.
In 2007, Gujarat Chief Minister Narendra Modi honored him with the “Chitralekha Person of the Year Award — 2007”

In 2007, he was selected as the Businessman of The Year by a public poll in India. The event was conducted by NDTV. In the same year he was honored leadership award by the United States-India Business Council (USIBC) for his ‘Global Vision’ in Washington
Asia’s Power 25 kept him in the list of The Most Powerful

‘As long as we place millions of Indians at the canter of our thought process, as long as we think of their welfare, their future, their opportunities for self realization we are on the right track. For India can grow, prosper, flourish only if they grow, prosper, flourish. We cannot grow by any esoteric strategies. Our purchasing power, our economic strength, our marketplace all depends on the prosperity of our people’
‘I think that our fundamental belief is that for us growth is a way of life and we have to grow at all times’