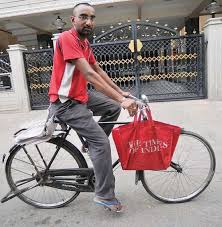 Talent is inexpensive and a great deal of individuals possess it. However, what makes it howl and precious is sheer hard work and persistence- nothing can substitute them. N Shiva Kumar, the son of an illiterate mother and a truck driver father, has accomplished his goal proving that poverty is not an impediment to success. At the early age, the state of his family taught him to respect and value the hard work and time. When he was in Class 3, he started selling flowers his mother strung into garlands by the roadside to run his poverty-stricken family. He began to work as a newspaper delivery boy when he was in Class 6 and became vendor at the class 10. He would set off at 4am with newspapers loading up on his bicycle and continued before the sun appeared on the horizon to save time for his studies. A routine that he maintained from class 6 and with experience he managed a very good balance between his studies and part-time job that has helped him to crack the IIM entrance test 2012.

On completion of his schooling from Maruthi Vidyalaya, Horamavu Agara, He attended Bangalore Institute of Technology, where he still continues his studies of computer science engineering.