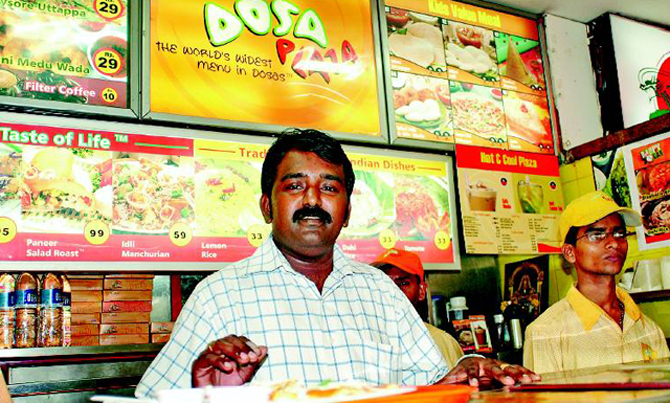 Mr. Prem Ganapathy is a passionate cook and aspiring entrepreneur who comes from a poor family from Nagalapuram in Tamil Nadu’s Tuticorin district. Despite being a bright student, he had to abandon his dream of higher studies to financially support his family. He arrived Mumbai along with one of his acquaintances who promised him a job with the salary of Rs. 1,200 per month but disappeared after taking Rs. 200 that he had at Bandra station.
Ganapathy was left penniless. He had no acquaintances who he could turn up to, nor did he know the local language.
But he decided to stay and try his luck. After doing several odd jobs including washing dishes at a local bakery at Mahim for Rs. 150 a month and working as a cook at a small restaurant, in 1992, he managed to save some money to rent a handcart for Rs. 150 and Rs. 1,000 to buy utensils, a stove and basic ingredients and set up his own food business on the street opposite the Vashi train station. He started selling Idlis and Dosas.

In 1997, he managed a small space paying a monthly rental of Rs. 5,000 and hired two people and named it Prem Sagar Dosa Plaza. Very soon his small business started earning him Rs. 20,000 per month in profits. The restaurant was especially liked and frequented by college students with whom he shared a good relationship and in return they helped him to use the Internet, where he came across the new recipes from across the world. Ganapathy started experimenting with Dosas and very soon he introduced more than 20 different Dosa items. It became a big hit and by the year 2005 he launched 105 different dosas items which drew even more people to his restaurant.

Today, Dosa Plaza’s net worth has been estimated to stand at Rs. 30 Crores and it has opened 45 new outlets across India cities and has over 10 International outlets in New Zealand, Dubai and Middle East.

Info and Photo Source: The Times of India