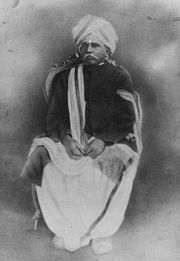 Some people are destined to write their own success stories regardless of whether they begin in odd and hostile circumstances. Some shun their their aristocratic root and start their own tale from zero in hand.
Dharmarathnakara Rai Bahadur Arcot Narrainsawmy Mudaliar was one such example who became the Merchant of Bangalore with his hard work, determination and persistence. He belonged to an aristocratic historic family and his great-grandfather was the secretary to the Raja of Gingee. Muthu Pillai, his grandfather, worked as a supplier of provisions to the Raja and did considerably well but he had left his son Muniyappa Mudaliar almost starved due to an unfortunate event of a severe blow of fire that took every fortune away from the prosperous family. On his father’s demise, the 10-year-old Mudaliar became responsible for running a greatly needy family of mother and two younger brothers.

Narrainsawmy Mudaliar was born in 1827 on May 14. As misfortune knocked his door at the tender age, he got no opportunity for formal education and he migrated to Bangalore where his father soon died leaving him to be the sole earner of the family. After doing several odd jobs, at the age of 22 in 1850, he started selling vegetables. He would buy vegetables from the nearby villages and then transport them to Bangalore and Chennai. After doing considerably well in vegetable business, Mudaliar tried his hand in salt trade. He started buying ‘Madras salt’ and selling it to the local shops in Bangalore. He opened a shop in the Cantonment with his capital. Soon, his customers list increased in which Krishnaraja Wodeyar, the Maharaja of Mysore, became his dedicated client in 1859.

Mudaliar was a very simple and honest humanitarian. In later years, under the influence of Tamil Saints, he became a renowned philanthropist and spent several years helping the poor and destitute. Emerging through the pathetic and helpless life of poor, he was very empathetic towards the starved and poor and he believed to uplift them with money. He did several charity works, initiated some social reforms; some of them are Subramanyaswamy Temple and Muthusawmy Mudaliar Choultry in 1872, Thirukulathar School, Halasur in 1883, Technical School for Civil Engineering in 1887, Kannappa Mudaliar Balika Patasala, Kancheepuram in 1898, R.B.A.N.M.’s Educational Charities and R.B.A.N.M.’s Chattram and several other Charities.