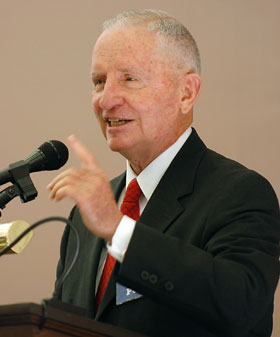 Henry Ross Perot, a U.S. businessman, is best known as the founder of Electronic Data Systems (EDS) and Perot Systems, the information technology equipment and services providing companies. He also ran for the United States’ Presidency as an independent candidate in 1992 and 1996. In 1962, he founded Electronic Data Systems, which was taken over by General Motors in 1984 for $2.5 billion. In 1988, he founded Perot Systems, which was also taken over by Dell for $3.9 billion in 2009. In March 2012, Forbes ranked him the 99th-richest person in the United States with a net worth of about US$3.5 billion.

Above-mentioned profile is the successful version of Henry Ross Perot who wrote his own success story through his insatiable desire to accomplish what he set out to do. Born in Texarkana, Texas to a cotton broker father, he could have followed his father’s profession and spent his whole life in obscurity like most of us do, but his wish to rise to prosperity and make life meaningful worked as the most powerful instrument that made him what he is today. From the young age, he set himself apart with soaring ambition, hardwork and curiosity. While in high school, he became an Eagle Scout and class president and was the battalion commander in the Naval Academy.

After leaving the Navy in 1957, he started working as a salesman for IBM where he successfully distinguished himself and became the top employee by filling the year’s sales quota in just two weeks. He had several unique entrepreneurial ideas, but he felt largely ignored by the seniors and left IBM in 1962 to establish his own company, Electronic Data Systems to employ his entrepreneurial ideas and skills. Back in 60s, it wasn’t so easy for him to nurture a startup. His road was rough and rocky but he didn’t give up. After 77 failed attempts to sell his data processing services to corporations, Perot somehow convinced and won a government contract and transformed the company into a technology powerhouse.

The secret of his success

1. His extreme desire created power and built confidence for him, helping him to continue to achieve what he wanted to.

2. Keep exploring innovative ideas! Wherever Henry Ross Perot would go, he would consistently explore ‘WHAT MORE’ which made him an achiever in every aspect of his life.

3. If you are unobserved and unnoticed at your workplace or anywhere, leave the place immediately. Don’t work losing your-self respect and self dignity. Remember! It might be a call for you to listen to move in life for better. Henry Ross Perot did not take a split second to leave IBM when he felt he was ignored and his entrepreneurial ideas were neglected.

4. If you are failing in you attempts, don’t get disheartened or depressed, it is the high time for you to not give up; you will never know how close you were to the destination. Henry Ross Perot received 77 rejections in convincing corporates to sell his data processing services but he knew his hard work will not go in vain and he kept attempting until he finally received a contract which made his company a technology powerhouse.

Some of the greatest quotes by him

“Most people give up just when they’re about to achieve success. They quit on the one yard line. They give up at the last minute of the game one foot from a winning touchdown.”

“Most new jobs won’t come from our biggest employers. They will come from our smallest. We’ve got to do everything we can to make entrepreneurial dreams a reality.”