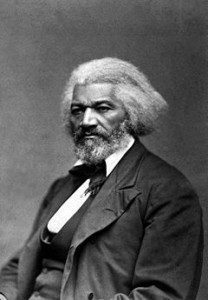 Frederick Douglass, an American orator, social reformer, writer as well as statesman, is known as a true rags to riches story of 19th century America. He rose to fame from the acute slavery and went on to becoming one of the most prominent and respected black men in the United States through sheer hard work, desire and passion.

Douglass was born as a slave in Talbot County of Maryland, USA. The exact date as well as place of his birth is unknown. He lived with his maternal grandmother, Betty Bailey for a very short period of time. At the very young age, he was sent to serve Aaron Anthony who worked as an overseer at Wye House plantation. A couple of years later, Anthony died and Douglass was given to Thomas Auld’s wife Lucretia Auld. However, she sent him to serve her husband’s brother Hugh Auld in Baltimore where he received fair treatment from Hugh Auld’s wife Sophia who taught him to read and write alphabets. Back then teaching slaves to read and write was considered against the law and was a punishable act. One day when Hugh Auld discovered his wife is assisting Frederick to learn how to read, he strongly condemned her saying:

“if a slave learns to read, he would very soon try to get off slavery and would desire to have freedom”.

His words were eye-opening to him and it was the very first time he realized that knowledge was the only option to escape slavery. He secretly started to read newspapers, various books and political materials that led him to exploring a new realm of thought and questioning and condemning the institution of slavery.
After spending some comfortable years in Baltimore, he was once again sent back to the county, where he was literally thrown to a farm run by a infamously brutal “slavebreaker” Edward Covey who gave him the complete brutal treatment. He was frequently beaten and barely fed. Douglass was completely shattered in body, soul, and spirit and finally decided to escape even at the risk of his own life. Douglass escaped the slavery after a few attempts and became the leader of the abolitionist movement.

He became a powerful orator and perceptive antislavery writer who initiated the intellectual development among the blacks who had no idea on how to function as independent American citizens. Douglass highlighted the experiences of his own slavery in 1845’s autobiography titled Narrative of the Life of Frederick Douglass, an American Slave. Back then, the book was considered one of the most instrumental forces to eliminate the slavery. In addition, he wrote one more autobiography titled Life and Times of Frederick Douglass in 1881 that describes the events of the Civil War. Douglass continued to fight to give African Americans a better life. He also supported women’s suffrage. Later, he became the first African-American to receive a vote to be nominated for the Presidency.

1. We often fear of taking risk or accepting challenges especially on the things nobody has attempted before. Thus, in panic, we fail to explore some of the greatest and unexplored aspects of several new things. If nobody has done this before, then I have 100% chance to be the first person ever to accomplish it.

2. Poverty, adverse circumstances or difficulties cannot be your obstacles until you make it for yourself. Douglass became the most prominent black man in the United States rising from extreme slavery. He was determined; so, poverty could not keep him from becoming what he wanted to be.

3. Burning Desire, Determination, hardwork and passion are the words of greatest personality’s secret to success. These three qualities made Frederick Douglass one of the greatest and influential black men across the world.

Some of his greatest quotes:

“A battle lost or won is easily described, understood, and appreciated, but the moral growth of a great nation requires reflection, as well as observation, to appreciate it.”

“A little learning, indeed, may be a dangerous thing, but the want of learning is a calamity to any people.”

“I prayed for twenty years but received no answer until I prayed with my legs.”

“I prefer to be true to myself, even at the hazard of incurring the ridicule of others, rather than to be false, and to incur my own abhorrence.”

“Man’s greatness consists in his ability to do and the proper application of his powers to things needed to be done.”