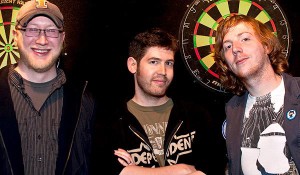 San Francisco based GitHub Inc. is a social network for programmers, developed on Ruby on Rails and Erlang in 2008 by developers Tom Preston-Werner, Chris Wanstrath, and P.J. Hyett to simplify sharing code. GitHub offers free accounts for open source projects and paid plans for private repositories. By the year of January 2011, GitHub had more than 1 million users and by the start of 2013, they were hosting over 5 million repositories and had crossed the 3 million users mark. In 2009, GitHub won TechCrunch’s ‘Best Boostrapped Startup’.

GitHub charges between $7 and $200 as the monthly subscriptions from its users to store up their programming source code besides providing effective tools to make it easy for decentralized teams to work on a single project. Some of its users are Microsoft, Mozilla, Facebook, Twitter, LinkedIn and VMWare.

Tom Preston-Werner. co-founder and chief executive officer of GitHub, belonged to Iowa from where he moved to the west coast to study physics at Harvey Mudd College but dropped out after two years to pursue his interest in programming. Prior to GitHub, Tom invented Gravatar, a service that provides users to create different unique avatars. Gravatar was acquired by Automattic in 2007. He also worked as a Ruby developer for a Wikipedia and a search engine Powerset that was taken over by Microsoft.

A college dropout, Chris Wanstrath is an avid advocate of open source and he has significantly contributed to hundreds of different open source projects. Prior to founding GitHub, he has served CNET Networks as an engineer and worked on Gamespot and the launch of Chow. Chris has been named one of BusinessWeek’s “30 under 30” young entrepreneurs to watch.

On completion of his BS degree in Computer Science, PJ Hyett moved to San Francisco and start his job at CNET where he worked until the launch of his start-up GitHub Inc.